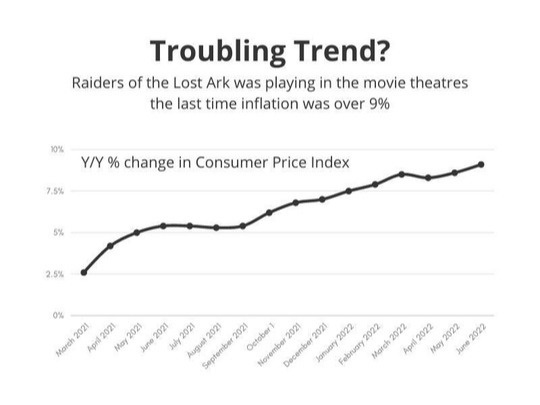 Stop me if you heard this already—roughly half the population wasn’t alive last time inflation was at this level.

It’s true. According to IMDb.com, Raiders of the Lost Ark was the #1 movie at the box office the last time prices were rising at a rate of 9% a year.

In economic circles, the most widely-followed inflation barometer, the Consumer Price Index, is considered a lag indicator, meaning that by the time it’s reported, prices likely have changed. The question is, are prices continuing to trend higher or are they moving lower?

The Fed will attempt to answer that question at its July meeting, when it makes a decision about short-term interest rates. There’s speculation rates could jump as much as 1% to curb inflation. But the Fed has to watch for a backfire, as a 1% move may send a desperate signal to the financial markets.

High inflation is a pain in the wallet, but nothing lasts forever. In the meantime, try not to watch the markets too closely, and go to the movies this summer. Who knows? We might be watching history in the making.